Keep It Classical Ep. 101 – Opera Bass Carves Out His Own Path

Zachary James doesn’t accept “no” as an answer. Or if he does, he’ll most certainly find another way to get what he wants. As a Musical Theater major at Ithaca College, James realized that his real passion was for opera. Certainly, his lack of knowledge on the subject wasn’t going to be the thing that held him back. He knew what he felt inside, he knew he had to pursue opera.

With the help of his voice teacher, James took it upon himself to catch up to the rest of the voice majors at Ithaca who he said at the time, were a world ahead of him.

Mere months after changing his trajectory, however, he found himself on the other side of the world in Italy, performing Oberon, the lead in his first world premier opera which was based on Shakespeare’s A Midsummer Night’s Dream.

Zach and I met in Italy and became fast friends that summer. Since then, he continues to set himself up for success by creating his own opportunities. He calls it crazy; I call it tenacity and persistence. He’s been on Broadway, created a role in a Philip Glass Opera, started two opera companies of his own, etc.

During the interview, James told me that the dream is to perform world premieres and Wagner. Well, he’s got the world premier thing in the bag a couple of times over, and now he has his first Wagner role lined up for next year with Arizona Opera. And in 2019, James will make his debut on the biggest stage of them all, the Metropolitan Opera in New York City. He won’t say what the role is, though I have my suspicions. I guess we’ll just have to wait to find out. 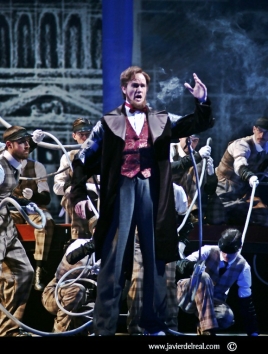 In the meantime, as the general director of Opera Ithaca, James is bringing world-class, innovative, and compelling opera to the town of his alma mater. All of this while he lives “the dream” on his terms!

Also in this episode, Melony Dodson from WUOT in Knoxville, Tennessee talks to Keep It Classical about the Big Ears Festival which takes place in the “Scruffy City” this weekend. She’ll tell us about how it got started, what the vibe is like in Knoxville when all of these musicians come to town, and what we can expect from this year’s festival.